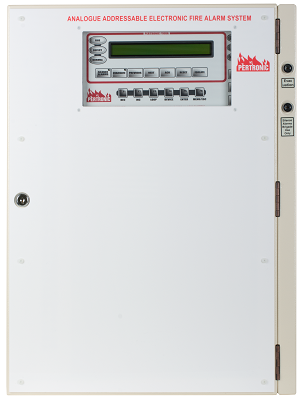 The Pertronic F100A is central to thousands of fire alarm systems in New Zealand and overseas. F100A systems often have multiple networked panels, sometimes with evacuation or mass notification systems, air or smoke handling systems, and ancillary controls such as door holders or lift controls. The F100A is also the foundation of many Pertronic suppression agent release control systems.

The original F100A was designed in 1998. It had been through a small number of microprocessor upgrades during its life. However, it was designed with “through hole” technology, which is now being superseded by “surface mount” technology.

In late 2014 the decision was made to redesign the F100A masterboard using the latest surface mount components. This change to SMD technology gave increased production efficiencies and by using the latest SMD parts, gave much greater protection against the risk of important components becoming obsolescent.

In view of the magnitude of the change the decision was made to submit the F100A to Opus Laboratories for a full retest to NZS 4512:2010. This was an opportunity to demonstrate that Pertronic products meet or exceed the toughest regulatory requirements. The new F100A was sent to EMC Technologies in Auckland, who tested for compliance with BS EN 50130-4, EN 55022, and AS / NZS 3100. To comply with BS EN 50130-4, the F100A had to cope with power supply variations including surges, spikes, and drop-outs, as well as electromagnetic interference and electrostatic discharges. To verify compliance with EN 55022, EMC Technologies measured the F100A’s electromagnetic radiation over a spectrum from 9 kHz to 30 MHz. Electrical and safety tests were also carried out to the requirements of AS / NZS 3100. Additionally, Wellington-based Opus Laboratories tested the new F100A against the requirements of NZS 4512: 2010 (Fire detection and alarm systems in buildings).

The test reports were submitted to FPANZ and the new F100A has now been accepted for listing on the FPANZ register of approved equipment. This has been a major project for the Pertronic engineering team.

To ensure that existing systems in widespread use throughout New Zealand can be easily maintained the upgraded F100A masterboard is a true drop-in replacement for the through hole version. The system compatibility, functionality and specifications remain unchanged.