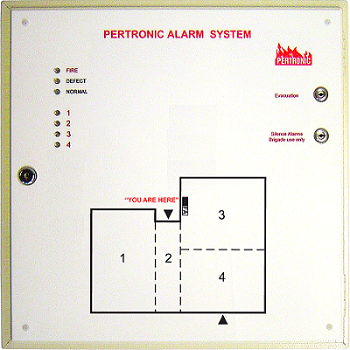 The F4-RMAX board is compatible with all major F4 variants and options including the Type 5 Sound Control Board. It is available as a factory-fitted option on new F4 fire alarm panels.

The board is also available as a kit for field installation. To drive an LED mimic the F4 panel must have firmware version 5.02 or later, and master board version 5.05 or later. In older panels, the F4-RMAX board will not drive a remote mimic, however, it may be used as a drop-in replacement for the F4 Auxiliary Relay Board (F4AUXRLY, F4AUXRLYV2).

The connection between fire alarm panel and remote LED requires a four-core twisted-pair cable such as Pertronic SGDCI Mimic Cable.