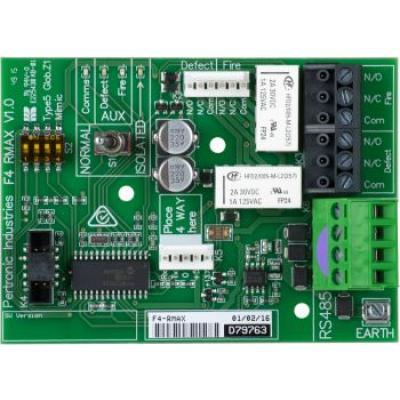 The F4-RMAX is compatible with F4 fire alarm panels fitted with version 5.02 or later firmware, and version 5.05 or later F4 master boards.

The Auxiliary Fire relay is normally de-energised and operates when any circuit activates into a Brigade Calling Alarm.

The Auxiliary Defect relay is normally de-energised and operates when any fault occurs.

The F4-RMAX board may be fitted in a Pertronic F4 panel that also has an F4 Type 5 Sound Control Board, provided the panel master board is Version 5.05 or later.