The Hagley Oval in Christchurch’s South Hagley Park has been used for provincial and local cricket since 1867. After the recent earthquakes Hagley Oval was upgraded into a world-class cricket venue to replace the earthquake-damaged AMI Stadium. Its first international cricket match – the opening game in the ICC Cricket World Cup between NZ and Sri Lanka – was held in February 2015.

A major part of the upgrade was the new pavilion, designed by Athfield Architects and opened in September 2014. Protecting the tent-like pavilion presented some interesting challenges, especially as the architects did not want services encroaching on fabric ceiling surfaces, such as in the main function room.

The fire detection system is supervised by a Pertronic F100A analogue addressable panel, installed by Fire Fighting Pacific, Canterbury. The function room is protected by an aspirating smoke detection system with sampling pipes between the outer and inner layers of the double-skin roof, and capillary tubes through holes in the inner skin. Linear heat detection cable is threaded into pockets spanning the entire roof. 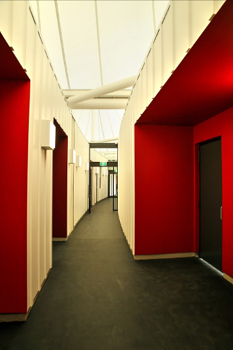