From F30 to F220: The Evolution of a Masterpiece 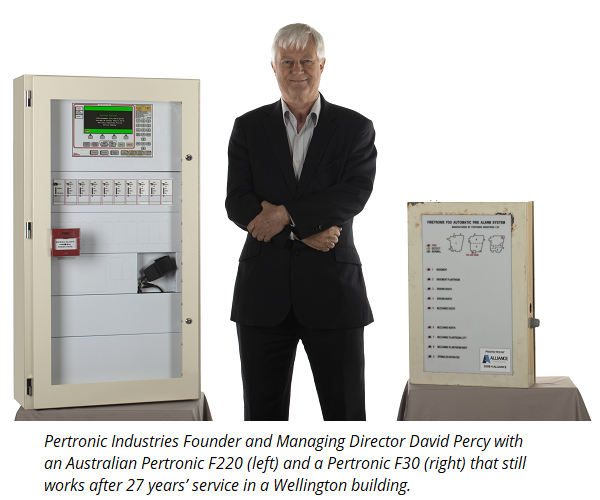 Pertronic Industries introduced its first fire panel in 1986. Designed by company founder David Percy, the very successful Pertronic F30 used conventional detection technology and was available in two variants. The standard F30 was able to monitor up to 30 detection zones, while the mini version could monitor up to ten detection zones.

In 1991 we launched our first micro-processor controlled panel, the F40. This had an LCD display, keyboard, mappable relays, mappable LEDs, and a history log. The F40 could monitor up to 255 responder modules, which were mounted remote from the panel. Conventional responders had multiple detection zones. Later, an addressable responder allowed analogue addressable detectors to be used in Pertronic fire systems.

During the mid to late 1990s we introduced the microprocessor-controlled Pertronic F1, F4, and F16 conventional panels. These had universal detection zones: Each zone could have a mix of smoke and heat detectors and manual call points.

Cause and effect logic capabilities in the F120A allow the programming of project-specific functionality.

Following the introduction of the F100A and F120A, we progressively expanded our product range to include networking, remote monitoring and diagnostics, and the FireMap PC graphic system.

In August 1999 we introduced Firebits, to provide regular updates for Pertronic customers.

Our latest fire panel brings new capabilities to the fire panel market. Designed around powerful ARM processors, the F220 does far more than simply collect and respond to data. The F220 can analyse information about hundreds of thousands of events and present the results in practical, user-friendly formats. We wanted the new panel to save time and money for installation contractors and facility managers. We hoped it would help fire-fighters save lives.

The F30 was very simple. But it was versatile and expandable. Those themes of simplicity, versatility and expandability ultimately led to the Pertronic F220. In Australia the F220 has proven ideal across a wide spectrum of projects, from small systems with one or two loops, to eighty-story skyscrapers and motorway tunnels with more than a hundred networked panels. We are proud to release the New Zealand variant of the F220.